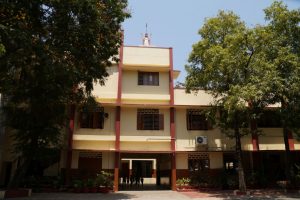 The Golden Past is something to be viewed and cherished. So it is with Christ King Mat. Hr. Sec. School. It was in 1935 that our late Superior General Mother A. Annunciata A.C. sent sisters from Mangalore to the new school of the Apostolic Carmel, which was just a rented house of Mr. David near the railway town of Tambaram, calling it Carmel House. The convent and school started here with the permission of the Church authorities.
The early years saw Sister Frances, Mother Thecla, Sister Teresa, Sister Crispein and Mother Xavier do the spade work. The school grew with one higher class each year. A year or two later the Bishop very generously gave a part of the Church land close to the rented house. In July 1938 the convent and English medium school moved to the new location and was called Christ King Convent and Christ King School.
In June 1942 classes I to VII shifted to Selaiyur, a kilometer away as a plot was given to us by the collector. Many Apostolic Carmelites walked through the portals of this institution contributing to the gradual growth of Christ King School.
In 1973 Christ King Convent, Tambaram was attached to the Southern Province. Sr. Julienne (1980-84) H.M. put up the Ground Floor of the new block.
Sr. Rosy Joseph our Provincial Superior encouraged us to upgrade the school into Matriculation. In June 2003 we had 40 children in std. VI (only girls) and it was a full pledged school open to all communities. Sr. Annie David (2001-2003) H.M. and Superior was the first Headmistress of the upgraded High School. She was behind the erection of the second floor of the Golden Jubilee building and the integrated laboratory for the upgraded classes.
Sr. Sujaya (2004) H.M. and Superior made us familiar with all Government norms. It was she who designed the High School uniform. The first batch of X std. has been a marvelous record of success with excellent results. The institution witnessed remakable elevation in the educational field, extra-curricular activities, spirituality, diocesan circle etc. Several medals and Awards flooded into the school at the District level and National level.
Our school was chosen as one of the four best schools in Tamil Nadu and we received the best school award in 2008. To bring out the talents in music, keyboard classes are conducted regularly. Cubs and Bulbuls are revived, Red Cross, Guides, Carmel Blossoms, Yoga, Karate, club activities and extracurricular activities are conducted for the all around development of the students. A new building was put up for the expansion of the High School classes with facilities.
Sr. Christy Maria A.C. (2014 till date) a young and energetic Principal stepped in to complete the growth of the school. With her tireless effort the High School has grown into a Higher Secondary School. Classes for std. XI began in the year 2016 and we are expecting a successful and vibrant batch to pass out std.12 in the year 2018. She also made sure that the infrastructure is up to the need and standard of a higher secondary school of education. The second floor of the main building was built for that purpose. A new library was built by her on top of the stage which is a unique glass library, the first one of its kind in the neighbourhood. She works on tirelessly preserving the culture of the school (the nature, the social services, the extracurricular along with the academics) to uplift the standard of the school considering the welfare of its students as well as its staff.
We hope and pray that Christ King Mat. Hr. Sec. School gives to God and country women of great inspiration, courage, gratitude, commitment and contentment. Above all we go on with the faith in the unseen power and the vision that ‘With God all things are possible’; His blessings alone are sufficient for us and He alone can rule the destiny of this Institution.