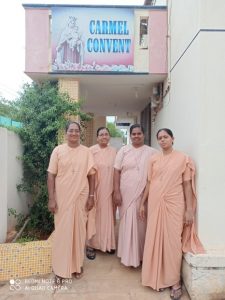 God intervenes into the life of everyone and fulfills His plan and purposes in our lives and He creates all thing anew.
It was on 25th May that Sr.Anna Maria A.C. who was in charge of Carmel convent, Trichy had to close down the convent at Trichy and returned to Ottapalam.  When God closes one door, He opens another. It was decided again at the General Chapter to re-open the convent at Trichy. On 2nd February 2014 the sisters took  a rented house at Ramachandra Nagar, Edamalaipatty Pudur, Trichy and formed a little community. Sr.M.Premila A.C was in charge of the community along with Sr.Pauline Marie A.C and Maria Agila as the community members. Rev.Fr. Benjamine Franklin OCD, the provincial superior offered mass in this little house. It was a joyful day for the sisters and for the locality. The sisters were permitted by the Bishop of Trichy to reserve the Blessed Sacrament in this little house.. Later the communitywas shifted from Pudur to Nagamangalam where the sisters had some land. Through the instrumentality of Rev.Fr.Devaraj, the  Parish Priest of Divine Mercy Church, a house was taken on  rent and the sisters were given posts at Good Samaritan school. The visitation of the Provincial superior, Sr.Ancilla  in 2015 and  Superior  General, Sr.Susheela in 2017 paved the way for a new building which would also be used as a Delegation House.

On August 15th 2015 was a special day for Tamil Nadu as there was an Installation of Delegation Superior for Tamil Nadu. Sr.Jayamary was  appointed as Delegation Superior. It was on an experimental basis for one year. On 9th September 2015, the Superior General and Council approved the Delegation status. The communities in Tamil Nadu in the Dioceses of Chingleput, Vellore, Trichy, Coimbatore, and Sivagangai come under the Delegation leadership of Sister Jayamary along with the councilors, Srs. Sujaya, Maria Deera and Maria Celia.

At present the committed services of our sisters in the locality and at the substations were much appreciated.

We had Provincial Superior’s visitation on 18th August 2015. We were strengthened by her visit. We also had our Superior Gereral’s visitation from 22nd June 2017 to 24th June. Sr,Pavitha A.C. Our Bursur General accompanied her. Sr.Susheela Our Superior General told us that the Generalate will see to the building of the Delegation House

We had Delegation Animation Programme 0n 4th March 2017. Sr.Susheela our Superior General motivated the sisters of Tamil Nadu on the Theme- A Passionate A.C. for Christ’s Mission in Tamil Nadu. We had SWOT analysis on Delegation Sr.Ancilla our Provincial Superior also animated the sessions. It was very enriching.