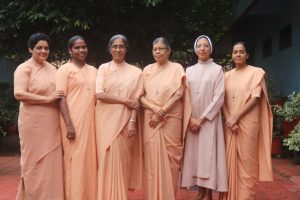 Mr. Cherunni, the father of Sr.M.Theodolinda A.C. and a couple of Parishioners of the Little Flower Church approached the Pro-Provincial and team requesting to buy an available land to begin a convent and school     in the land of ‘Rajas of Nilambur’ to create a Christian atmosphere and catholic culture. The Missionaries of St. Francis de Sales intended to shift the Philosophy students from Nilambur to Bangalore and prepared to sell their fully equipped ‘es tablishment, with 10 acres plot on reasonable terms. The Apostolic Carmel purchased this land and building and the sisters replaced the missionaries of St. Francis de Sales at Fatimagiri on 26th April 1971. The good fathers left behind the entire furniture and chapel requisites, the entire electrical fittings, the well pump and sanitary fittings. The people of Nilambur wanted the sisters to open a school at all cost. Responding to the plea of the people the sisters started a school for the people of Chandakkunnu, Nilambur, Malappuram Dt, on June 1st 1971.The school remained as a primary school for 27 years..The foundation stone for the convent was laid in April 1999 and the sisters moved into their new convent in March 2000.

After the school got affiliation from the CBSE board, the KG classes were separated from high School. In 2000 the boarding house was also closed due to lack of space. The school was upgraded to Senior Secondary in 2011. A new Nursery building was inaugurated on 28th April 2017 and the KG section was shifted to the newly constructed Nursery building on June 1st 2017. Mother Carmelita, the Superior General, at her visitation in 1973, encouraged the sisters to begin a health centre. On 20th December 1975, the Panchayat president laid the foundation stone of the Health Centre and it was inaugurated on 8th September 1976.

In 2000, Sr. Dr. Agnesita MBBS, M.D took charge of the dispensary. She was instrumental in opening the Mother Veronica Special School for the mentally chal- lenged in a rented building at Chungathara in April  2001. Sr.Marinie A.C took charge of Fatimagiri Social Service Centre (FSSC) in 2010. The post 2010 period characterized a remarkable projects like VDP AND RDP and Revolving Fund by KKS, Habitate Housing Programmes, Income generating Programmes,  women  empowerment  though  SHGS  for Tribals  and  Dalits in Nilambur, Village Development & Rural Development programmes. The school was upgraded to senior secondary in 2011 the foundation stone for the Nursery section was laid on 16.06.2016 by Rev. Fr. Paul Koottala the vickar of Little Flower Church and was inaugurated on 20 th April 2017 by Sr. Ancila. The 2 floors of the new high school block was completed on 24 th August 2017. Over the years, the services rendered by the convent, school and health centre/social service centre have brought about a tangible change in the lifestyle, attitude and culture of the people.