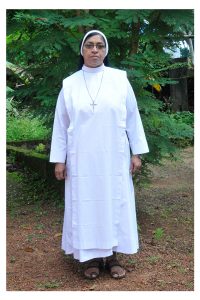 In 1985 Carmel Convent was opened at Madappally, Changanacherry. The late Archbishop Antony Padiyara was happy to have us in His diocese to see to the spiritual and intellectual development of the people of the locality who will dedicate themselves for this cause. We were engaged in home mission and seeing to the needs of the people. The people of the locality requested us to begin an English Medium School where the common and marginalized people could afford to send their children.
In June 1993 we started the school in the rooms already existing in the Convent. Sr. Cartias, the, then Superior of the house saw to the beginning of the new school with Std.I. In May 2002, the school was re-modelled on the top of the convent building and we had classes from Std I to Std IV with 170 students and seven staff members. Students were increasing rapidly in our school because of the dedicated service of the Management and staff. For the further expansion of the school 2.29 acres of land was bought in Vakkelpady in 2014 in addition to the existing land and the new building was put up and blessed with all the facilities on April 9th 2015 by Rt. Rev. Dr. Joseph Perumthottam, Archbishop of Changanacherry.
The people of the locality are very happy because they can afford to send their children to our school with low fees, and very poor ones are given fee concession and free books. Keyboard, Band, Music and dance classes are conducted regularly to bring up the talents hidden in our students. Value Education classes are conducted to instill Moral values, Love of God and neighbour, respect for the elders, brotherly affection, respect for all caste and creed.
We go forward with hope under the protection of our Lady of Mount Carmel to greater heights.