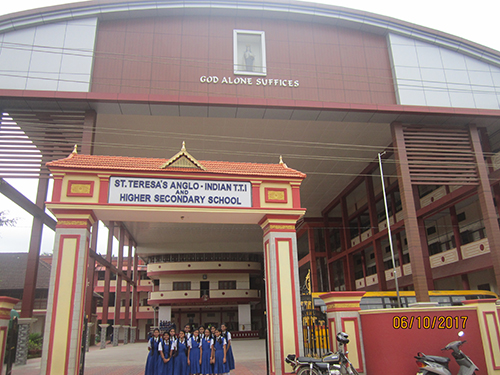 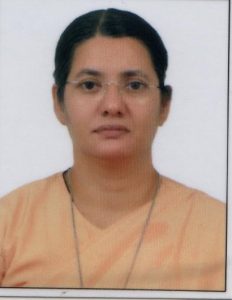 Year of Starting : 1867
Vision: “Rooted in God, Transform lives
Mission: Through all round development bring up committed leaders who share responsibility in transforming the world.

St. Teresa’s Anglo Indian Higher Secondary School, situated on the banks of the Arabian Sea is in the fore front of educational development for young girls. Since its inception in 1867, the school has grown tremendously.

From 1867 to 1871 this institution was called St. Joseph’s School as it was run by the sisters of ‘St. Joseph of the Apparition’. It was only in 1879 after the Apostolic Carmel sisters took over the school was named ‘St. Teresa’s School’. From then on the motto of the school has been ‘Amor Et Officium’ which means “Love and Duty “
Mother Magdalen Lubis, a French sister was appointed as the first Headmistress as she was found to be a capable administrator and a zealous manager. Both girls and boys were given admission. Sr. Beatrice was appointed as the next H M and the school was retained as a Middle School until 1943 under the code of Regulations of European School.
In March 1885 Malayalam was introduced as the second language. The school catered to the needs of the European children, Portuguese children and a few affluent people of Cannanore. The school also had a boarding house.

In 1906 the school came under the Madras Presidency. From 1908 onwards students started attending the “Trinity College of Music London” examination and they came out in flying colours.

In 1973 the management of the school came under the governing body of the A.C Education Society of Calicut, registered under the Societies Registration Act of 1860.
In 1941 the School received sanction from the Director of Education to open a Training School. Later in 1974 the Training School was bifurcated from the middle School. In1950 the High School classes began functioning.

In1956 the school came under the Kerala Education Department which allowed the school to continue under the scheme of the Anglo Indian High School Examination of Madras. In 1971 School Library and an Assembly Hall was put up.

In 1972 the school got affiliated to the council for the Indian School Certificate Examination, New Delhi and the scheme continued till March 1984. March 1984 onwards the students prepared for the SSLC Examination and the first batch consisted of 65 students. Today the number has risen to 185.
The N.C.C Cadets was formed by the St. Teresa’s unit.

A guide troupe was also formed in school. In 2004-2005 additional division’s for Std X commenced. In 2005 a one storey building was put up. A Smart Class room was also set up.

In 2008 the Higher Secondary Section was separated from the High School. As the years passed by our school gathered laurels in curricular and co-curricular activities. St. Teresa’s which started as a tiny seed, was nurtured and cradled by able hands and has become a mighty oak tree today
Our education is rooted on values and the maxims of St. Teresa. Our success is due to the concerted effort of all the benefactors, well – wishers, parents, teaching and non-teaching staff under the able leadership of those at the helm.

With the Providential Care of Our Lord we move forward with our motto, “Love and Duty”.