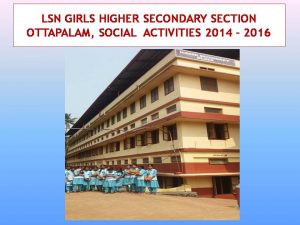 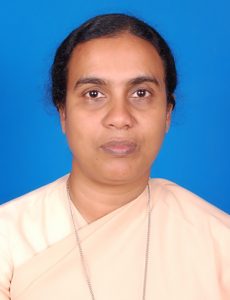 Year of Starting : July 2000
The Purpose of Starting, Vision and Mission:

Ottapalam, with its rich heritage, had very little to be proud of, as regards educational facilities. Just a hamlet, situated between the commercial centres of Trichur and Palakkad, it was the seat of Nair aristocrats, who owned almost all the land in the village, and the rest of the population had a hand to mouth existence. The aristocrats were rich enough to afford education for their children, in the town or in the cities outside, but the rest of the population remained mostly illiterate, for want of adequate facilities. So there was a crying need to educate the women. The idea of a girls’ school was the brain child of Sir C. Sankaran Nair, who thought of perpetuating the memory of his wife by a school after her demise. Thus was born Lady Sankaran Nair High School. But the administration seemed difficult for them.

The urge to illumine the society with the light of education and love for the Lord, propelled the convent authorities namely Mother Josephine, Mother Leonora to accept the offer and go ahead with the uphill task. The only condition attached to the agreement of transfer of the school was, that it should never be renamed, and hence, the school came to be known as Lady Sankaran Nair Convent School. Here was a ‘Mission’, where the ‘Good News’ of the Gospel had to reach, and it was up to the Apostolic Carmel to hearken to the message, “The harvest is ready’.

In September 2000, the school was upgraded into a Higher Secondary School withScience and Commerce streams. A new building for the Plus Two section was constructed and itwas blessed in 2001.The second floor was completed the following year. To fulfill the conditions laid down by NCTE, an auditorium was put up over the Plus Two block and was blessed on 23 March 2002.The first enrollment was with 141 students. The institution gratefully remembers Sr. M. Elizabeth, the first principal and Srs. Snehalatha, Lilly Jose, Smt. Nirmala.M and Sr. Sudeera who steered the institution with efficiency and care.

At present the Plus Two section has fifteen teaching and three non-teaching on their staff list and 363 students. The institution has to its credit the Highest pass percentage in the District for the Higher Secondary Examination. It was awarded for integrating the class room learning activities with social work. Regular catechism and moral science learning, activities for faith formation are special features for the section. The School takes up many social projects under palliative care unit for children and women.