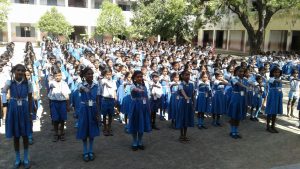 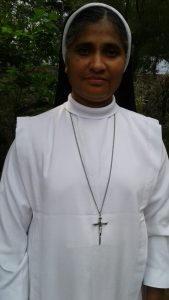 The 1st of July 1935 was a day of great rejoicing for the people of Tambaram, The Apostolic Carmel Started the Christ King convent and school which was the fulfillment of a greatly felt need of the time.

A causal visit was paid in 1935 by Sr. Frances and 2 Sisters of Carmel hostel, Bainton, Mylapore that was the genesis of Christ King Convent and Schools in Tambaram. It was on this occasion that some Railway officials approached these sisters and requested them to open a school for the catholic children here. So the request of the officials made a deep impression on the sisters who at once appealed to Mother Annunciata A.C., the Superior General to open a school.
The seed sown by our late Superior General Mother M. Annunciata A.C. of happy memory in Tambaram, grew into a tree at Carmel House in the rented house of Mr. David. It was the year of the Lord 1935 and a year later its branch turned towards the Railway Colony where after much correspondence with the Railway authorities a bit of land was allotted to us on an annual license fee Rs.1/- This became the nucleus of the present Christ King Middle School.
people preferred Christ King School as it was a Middle School with admissions up to Std VIII.
. The years rolled on and the finger of God was there always pointing to better ways and better deeds. Most of the children of the 300 railway families registered in this school as it admitted children of all religion and caste. The people of Tambaram were kind and well disposed. Girls and boys from outside the colony also registered. Thanks to the pioneers and God’s continued blessings the shoot grew into a mighty tree with 1000 and more children. In the decades that followed it became the best Tamil medium school in the district. The railway authorities allowed us to use the railway play ground during school hours.
Sr. Dymphna A.C. who was the H.M. for two decades and more worked unceasingly to improve the standard of Teacher and taught Extracurricular activities, Catechism, Moral Science, Sodality of Our Lady, Soldiers of Christ, Guides, Bul-Buls, Cubs, Red Cross received a fresh impetus all carried out with much enthusiasm and zest. Love for the less fortunate was remarkable, noon meal scheme was launched. The education department recognized her work giving her the National Award for Teachers received from the President of India the Honourable V.V. Giri in 1964. Sr. M. Silvina A.C. the next H.M. continued the work with the same interest and love.
Sr. Silvina’s service was recognized by the state and she received the Best Teacher Award in the year 1985. The same year was the Golden Jubilee year of our Institutions. The staff and children put up a wonderful display of out-door activities on the Railway Grounds. Besides the first concrete school building of 8 classrooms was completed as the Golden Jubilee Memorial in the same year. After her retirement Sr. Sujaya A.C. took up the responsibility of the school till May 1995.
Sr.Jayamary A.C. who took charge in June 1995 put up the next two concrete buildings. In a span of ten years the 28 rooms were completed with contribution from Management, Staff and well wishers much trust in Divine Providence. The school was given a new shape, plenty of accommodation for the children. Since most children go to English Medium Schools today, only the poor and lower middle class enter this school. Much appreciation is given by parents and the public. Besides the usual plan for the day, in recent years computer education is added to the daily schedule with a well furnished lab and good many computers donated by Infosys. We have Carmel Blossoms, Lassac – Leadership Social Awareness Camp, YSM- Young Student Movement along with Bull-Buls, Guides and Cubs and they have regular meetings on Thursdays and give programmes at the assembly.
It was when Sr. Maria Arpana was H.M. that the school received the Best School Award in 2005 for the good work done by H.M., Staff and Children.
The teachers look at teaching as the joyful experience and have the satisfaction of moulding young children in their early years at school to produce better citizens for Mother India.

Our problem with the Southern Railway
Since December 2008 the Railway office has been asking us to vacate the school land for a railway terminal which has become a necessity due to the increase of the number of trains through Tambaram due to increase of travel as well as movement of goods. This came as a thunderbolt for us who were running the school for 75 years and had put up several pucca buildings during the last ten years. Inspite of several appeals from the management and the public on January 17th 2011 the railway office pasted a notice on the compound wall that the school building would be demolished on 22nd January. The Electricity Board was requested to cut the current and the Police Department to give protection.
Sister Jayamary the H.M. made a request to the Railway Minister Mrs.Mamata Banerjee and also to the Railway Board at Delhi to help us. Sister Nirmala the Superior General of the Missionaries of Charity and Sister Nirmalee the H.M.of our school at Delhi were of much help to get an order from the Railway Board on January 21st at 5p.m. requesting the Railway Office at Chennai not to take any action till further orders. Here in Tambaram Srs.Sujaya and Maria Deera along with Mr.Tamilselvan a benefactor approached the Advocate General Mr.Wilson and got a stay order from the High Court on the same day. God is great and our school was saved for some time.
Since then enquiries are made, officials come and go, meetings are held, 84,000 signatures have been sent to the Railway Board in our favour. The news papers give various opinions some in our favour others for a Railway Terminal at Tambaram. We continue to pay the License fee every year.
On 31st of May, 2014 Sr. Jayamary A.C. retired from the school, Sr.Caroline Daisy A.C. has become the Headmistress of the school till 31st May 2016. From 1st of June 2016 onwards Sr. Maria Jeevamalar A.C.(Sr.M. Selva Roseline Grace A.C.) has taken charge of Headmistress of Christ King Middle School. At present 31 teachers are working with Government salary and about 800 students are studying. And we have four management staff and two helpers are working in our school.
God’s greatness and His favour counts at every moment. His protection will continue since our school has only poor children who cannot afford English medium Education. Christ King has become a mighty tree reaching out far and wide because it is rooted deep in faith, hope and love. Prayer goes up through the intercession of St.Jude, the hope of the hopeless, St.Joseph, our powerful intercessor, Infant Jesus and Mother Veronica our Foundress. Even the Master’s pruning knife will only enhance its loveliness. In the Psalmist’s own words-
“Planted in the House of the Lord
They will flourish in the courts of our God.
Still bearing fruit when they are old.
Still full of sap still green.
To proclaim that the Lord is just.” Ps.91.