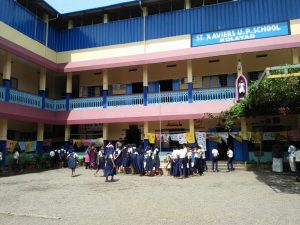 Our Vision: Faith in god, Love towards all living things, Self controlled
Punctuality, Discipline

It was the dream of Mother Isabel to have a convent in mission stations of Mananthavady and Kolayad. St. Xavier’s U P School was opened at the request of Bishop Paul Perini of Manglore on June 5th 1939. On June 1st 1950 a new wing was added to the school.
Mother Flora took Charge in 1951 and applied for permanent sanction to raise the school to an Elementary school. In1953the fist set of 17 children were sent for ESLC Examination.
In 1964 a new wing was added to the school. Sr. Agatha in 1969 re-modeled the old block. A new school building was put up by Sr. Theresemina in May 1999. In June 2002 English medium parallel section was started in Std V and an English medium primary school as a feeder to the above. In June 2003 the govt. sanctioned parallel English medium from Std I onwards. The English medium private school was closed down. St. Xavier’s U P School is the first one in the Province to have English medium parallel section. The vision of our foundress Mother Veronica is being fulfilled through this Institution by imparting Christian values.