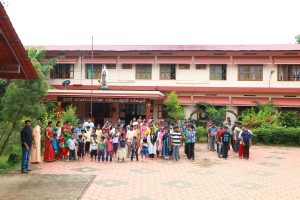 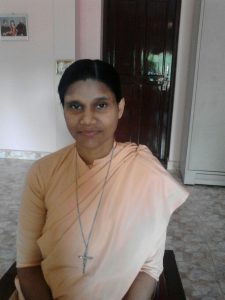 Mother Veronica Special School, Thalanji Chungathara caters to the education of Mentally challenged children. Mother Veronica Special school for the mentally challenged at Chungathara was started in 2001 by Dr. Sr. Agnesita A.C. To start with, there were six children,an inexperienced teacher and a helper. It was a day school in a small rented house. The Provincial chapter of 1998 had passed as one of the Action Plans: “We shall explore the possibilities of an organized Social Centre in Calicut city, eg, School for the mentally retarded”. Calicut city had already many rehabilitation centres so the Provincial Team decided that this special school in Chungathara take the place of the “Organised Social Centre as decided by the Provincial chapter.
Sr. Beatresa was trained at St. Agnes Special School, Mangalore in special education. Children were already increasing and we had to shift the classes to different places. People were not willing to give there building even on rent for running a special school for the mentally challenged. After many difficulties and hurdles Sr. Rosy Joseph the Provincial Superior purchased the present site of 1.5 acre at Thalanji in 2002. The construction of building was started at the end of 2003. In 2005 School received recognition from the Education Department of Kerala state. In 2006, Rt. Rev. Dr. Jose Porunnedam, bishop of Mananthavady diocese officially blessed and inaugurated the school.
Systematic and scienfific traing are given to the students. The motto of the school is LOVE OF GOD LIT IN LIVES. At present Mother Veronica special school is the one of the best schools in Kerala State. Our students excelled in sports and arts. We have a Physiotherapy unit and vocational unit. Well trained special educators and specialized staff are working for the whole round development of the children. Students are getting training in Dance, Music , Band ,sports and games along with academic training academic activities.