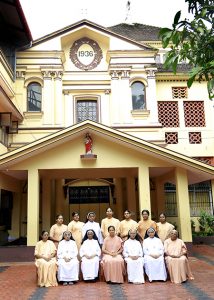 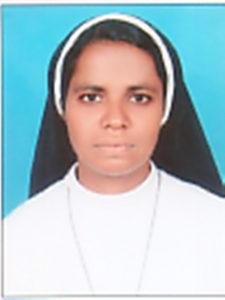 Sacred Heart convent foundation was made at the earnest request of Fr. Michael Montero Parish Priest of Holy Rosary church Tellicherry on 22nd March 1886 Rev. Mother Marie des Ange Superior General with pioneer sisters Teresa of Jesus, Beatrice of the Sacred Heart of Mary, Ignatia and Eulalia opened the convent in a rented house called’ Stella Maries’ in the very heart of Tellicherry town. Later in 1900 this house was purchased from Mr. J. Rozario by Mother Ignatia. Sr. Teresa was the first superior of Sacred Heart convent. On first April 1886 Sacred Heart School opened with 52 pupils on its roll. Sr. Beatrice was the first Headmistresses of the school. Due to lack of accommodations for sisters and school children at Stella Maris an adjoining Bungalow was taken for rent in 1888. Fr. Montero with the help of Mr. W. Lemerle a devoted benefactor of the convent purchased the property in the name of Superior General, Mother Marie Des Ange. From the start sodalists of Sacred Heart’s were a power house of piety and virtue which prepared a good ground for the seed of religious vocations to A.C and other congregations. The following are the list of sisters who joined in the earlier days from the parish and from the boarders. Sr. Leonora, Bernadette, Constance, Carola, Dosithia, Patricia, Gemma, Odilia, and Aime of the place. Mother Theodosia, Srs. Gertrude, Machtilde, Lelia, Elanor, Fidele, Ethelburga, Marie Jose, Josefa, Elaine and Annette Students of Sacred Heart who joined Apostolic Carmel . Devotion to Sacred Heart was the hall mark of both Catholic and Hindu children of the school. The whole school joined in Novena and feast celebrations with great love and devotion.

In 1891 Sacred Heart School was recognized as upper secondary school by the DPI and salary grant was sanctioned. A separate European school section started in 1906 at the request of European officials, was closed down in 1909 for want of pupils. Form IV was opened again 1907 and by 1909 Sacred Heart school became a complete High school. In 1911 the first batch of SSLC students numbering 6, secured 100% result. In 1918 Miss. Lilly Colaco later Mother Theodosia secured 100% in English in SSLC, a rare privilege.

On 21st March 1911 Sacred Heart convent and school celebrated silver Jubilee in the presence of Superior General Aloysia. On May 9th 1917 a house and property belonging to Mr. Maki Keyi’s sister was bought with the help of Mr. Lemerle after settling the law suit concerning the property and the house was named St. Joseph’s. L.P. section of school, functioned in this building after its separation from high school.

It was Mother Leonora’s strenuous effort that built up the Majestic Sacred Heart Convent and Chapel beautifully lit up and ventilated with the mighty Sacred Heart statue a top the structure.

1936 marked 50 years of existence of Sacred Heart School and convent. On 19th March newly built convent and chapel was blessed by Bishop Rt. Rev. Dr. Leo Proserpio S.J. Three days celebrations followed from 20th to 22nd March. Sr. Josefa took charge of the school for the 3rd time in 1951 and brought many developments and projects giving more importance for extracurricular activities, social service and Junior NCC. In 1954 a small nursery school was opened under the guidance of Sr. Milburga which was later called ‘Holy Angels’. In 195I Internuncio Rev. Dr. Martin Lucas visited the convent.

A two storied building was constructed at Dharmadam and blessed by our Bishop on 14th May 2001. Holy Angels Junior School was shifted to this in June 2001. Shooting of Tele film ‘Mother Veronica’ was done at Sacred Heart convent in 2002.

Due to the earnest request of PTA a Higher Secondary section started in the school from 13 August 2010. The sisters and the people experience the protection of the Sacred Heart all the years.