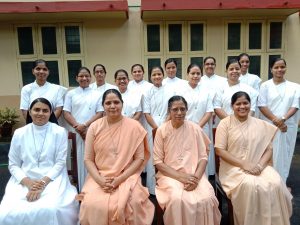 It was the cherished hope of the sisters of the Southern Province to have a novitiate of their own. The long awaited dream came true on 7th May 1994. The new house ‘Anugraha’ was blessed by Rt. Rev. Dr. Maxwell Valentine Noronha, Bishop of Calicut. He celebrated the first Eucharistic Sacrifice on 29 th May and preserved the Blessed Sacrament.

Our grateful thanks to God Almighty, Superior General Sr. Mariella and her team, and Provincial Superior Sr. Cleta and her team for their untiring , selfless effort and keen interest which made possible the completion of the Novitiate House within a short duration. In 1994, May 31st, the first set of 9 postulants were initiated into the Novitiate. Srs. Joselin Joseph, Elsa and Florentina formed the first community and Sr. Joselin Joseph was appointed as the first Novice Directress of the province Novitiate. The Novices were given training in deepening their personal commitment to Jesus. They were also provided with opportunities to develop their hidden talents and creativity through various programmes arranged forthem.

The visit of the Superior General and her team, The Provincial Superior and her team helped the Novices to deepen their call and gave them the sense of belonging to the province and the congregation. God’s Providence continues to shower upon Anugraha as the years passed by granting good vocations for His Vineyard. After twenty five years of its existence it is elevated to a common novitiate house of the congregation. At present there are twelve novices hailing from five provinces of India. Sr. Shilpa Maria of Southern province serves as the novice directress and Sr. Trisha from Northern province as the assistant novice directress. We pray and hope that Anugraha will bring down graces and blessings to the congregation by having and training many novices to work for His Kingdom.