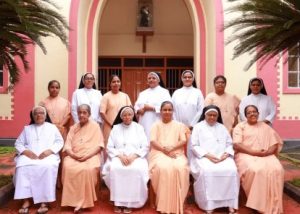 St. Antony’s convent and school grew like a mustard seed as in the parable of Jesus, from a tiny institution to the present magnificent structure imparting education to thousands of students. The only school which had been run by the District board of education for girls in around Vadakara upto 1938 was taken over by the Apostolic Carmel congregation on 2 nd July 1938 in response to the many appeals made time and again by the public of Vadagara through his Lordship Rt. Rev. Dr. Leo Proserpio S. J , Bishop of Calicut. On 13 th June , the feast day of St. Antony it was decided to place the new school under his patronage .St. Antony’s secondary school was blessed and opened on 4 th July 1938 by Rev. Fr. Zearo S.J, the parish priest for classes 1 st to VI th.

There was a cottage on the raised ground above the school which was a shelter for stray cattle. It was cleaned and scrubbed for days for the sisters to stay. Inauguration of the convent and chapel took place on August 10 th , 1938 by His Lordship Leo Proserpio S. J. The Present Convent building was put up in 1954 and a new wing, two storied was added to the Convent in 1971 for better accommodation for the sisters. A junior basic School was started in 1952 with L.P Section and was renovated in the year 1994. At the request of the public, a Malayalam nursery school named Punchiri Nursery School was opened on August 19th 1966. It was closed in March 2019 and it is under the administration of Junior Basic school. A Sewing class for the drop outs was started and its expense was met from School Social Service Fund.

Realizing the need of the time, the importance of English education, St. Antony’s Junior English medium School was opened in the year 1998. It remains as an unaided recognized School, The school has all the facilities needed and it stands first in academic and non-academic activities in the educational district.