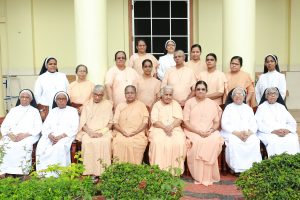 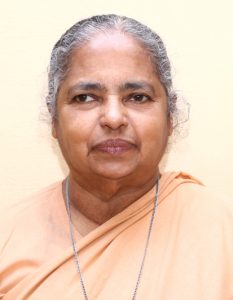 Nestling in the palm fringed shores of the Arabian Sea, the little city of Calicut boasts of Great Historical significance. With the advent of the Arabs, the Portuguese, the Dutch the British and natives of various Hindu castes soon came to be the habitat of Cosmo politan population and was destined to be the place where the Foundress Venerable Mother Veronica conceived the idea of a Carmel for the Missions. His Excellency Michael Antony, the Bishop of Mangalore decided to open a school for girls in Calicut and it was duly opened on 1st April 1862 and named St. Joseph’s Convent School with English as medium of instruction. Mother Veronica of St. Joseph of the Apparition was the first superior of the convent and headmistress of the school. She served the school for two years from 1862 to 1864.

It was here that Mother Veronica got the inspiration to start a Carmel for the Missions. She was sent to Great Carmel at Pau, France by Rev. Fr. Marie Ephrem OCD, the then vicar of Mother of God Cathedral to imbibe the Spirit of Carmel to transmit the heritage of Carmel to the Apostolic Carmel. It was started at Bayonne, France on July 16 th 1868. St. Joseph’s convent, Calicut has the unique distinction of being the only house of the Apostolic Carmel where the Foundress lived and worked for about two years as a sister of St. Joseph of the Apparition.

A Malayalam Elementary School, St. Angela’s School, was started with two sisters and two lay teachers on the staff in 1929. The academic and Non- academic excellence carried on from its inception is continued through the nursery, high school and the Higher Secondary which was sanctioned in 2000. On 7 th March 2001, the foundation stone was laid for the Plus two building by the District collector Mrs. Usha Titus. On 29th December 2001, the new school block( Millennium block) was blessed by Bishop Maxwell Noronha and inaugurated by Sri. Jayakumar, the District collector. In 2002 , 9 th March , the Mother Veronica memorial hall was blessed by the Vicar General Rev. Fr. Tom Arackal. The death centenary celebration of Mother Veronica was inaugurated at St. Joseph’s School on 4th November 2005. The highlight of the celebration was an impressive rally in which three thousand people participated including Sisters, Parents, Teachers, Carmel Blossoms and the ACAs. On 3 rd September 2014, the renovated chapel was blessed by Monsignor Vincent Arackal.

The old High school building was demolished in June 2019, and the foundation stone for the new building was blessed by Bishop Vargheese Chakkalakal on 16 th July 2019 and laid by Sr. Susheela, the Superior General.