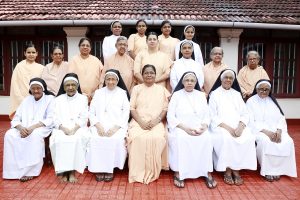 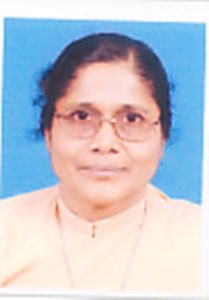 St. Therese convent is a beautiful spot overlooking the railway junction situated southeast of Calicut. This   is the 4th convent of the apostolic Carmel Congregation in Malabar. Bishop Paul Perini S.J who had come        to Calicut from the Diocese of Mangalore realized the difference between south Malabar and South Canara when it came to the question of Catholic educational Institutions. This railway junction seemed to be good    for the Bishop to afford greater scope for Catholic apostolate. Fr. Porta who was then the parish priest of the Catholic Church was restless until a Catholic school came up in Shoranur. After a relentless search and untiring efforts, the sisters found  a small house near the parish church on a rent of Rs.25 per month. A hall was put   up by the sisters for the school. The then superior general mother Josephine encouraged the opening of the convent and school in Shoranur. The convent and school were officially opened on 19th January 1929 with a few students on roll. Since the sisters got the place for the convent and school, through the intercession of St. Therese she is taken as the patroness of the convent and school.

As years rolled by,  St. Therese School grew up to a big high school and permanent recognition was given   to it in the year 1945. In 1961 as per orders from the government classes from 1 to 4 were detached from     the High school and were made a separate school   with its own headmistress. In 1965 the convent started    an English nursery school with 25 students known as St. Therese English Junior School. In 1998, St. Therese Higher Secondary school was started. Platinum Jubilee of the school was celebrated in 2004 with various programmes and the foundation stone was laid for a platinum jubilee memorial block. The Creche’ which was functioning for the poor children was closed in March 2005 as there were no deserving children in the locality. The ground floor for the Platinum Jubilee block was completed in 2005. The craft centre for the women of the locality was closed in 2007 due to lack of students.

A new building with twelve rooms and a housemaid’s block which   started in 2007, was completed in   2009 and blessed by the parish priest Rev. Fr. George Louis. The Platinum Jubilee Memorial Auditorium was inaugurated in 2012. The year 2014 witnessed the enrolment of the Latin religious houses of Palakkad District which belonged to the Diocese of Calicut till 2013, to the new Diocese of Sultanpet, Palakkad.

A house named ‘Verona Villa’ was built for a poor student of the school. An Orchard was raised and named after Mother Veronica in 2018. The new three storeyed building for the Junior School was blessed on 28 th November 2018. The ninetieth year of the Establishment of St. Therese schools was celebrated in January 2019 with various programs which included honouring of all the retired staff of the school.

Our institutions strive to change the prevailing situations of injustice by fostering a generous and active social concern among our staff, students and their families, thus helping to build a society of justice, love and peace. From its time of inception till today the sisters have been encouraging the students to be excellent in education and concerned about the poor and under privileged of the society.