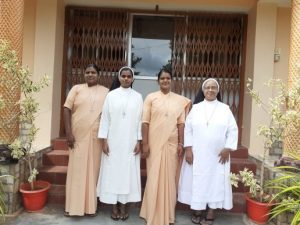 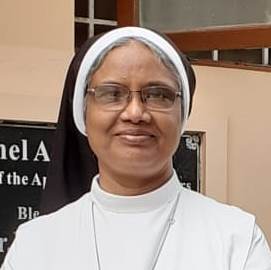 At the very start Good Shepherd Matriculation School was founded by Mrs. Mary George and Mr. George Pallikunath Varghese. It had its beginning in 1979. Mrs. Mary and Mr. George , well wishers of the sisters of the Apostolic Carmel owned a Matriculation School ‘Good Shepherd’ at Pollachi which is recognized by the Board of Matriculation, Tamil Nadu. After the death of Mrs. Mary George on 17th March 2004, Mr. George her husband found it difficult to run the school alone. So he approached Sr. Annunciata. A,the then Provincial Superior through Sr. Nativita, the batchmate of Mrs. Mary. The Provincial and the Team made a study of the place and was pleased to buy the land and school. Srs. Rosilina and Maria Karunya formed the first community at  Pollachi on 9th May 2006.They stayed in theHostel run by the Presentation sisters of Coimbatore for a month. The school was granted recognition on condition that they find sufficient ground for running the school. So the Provincial Superior Sr. Annunciata and her team decided to buy a plot of land of 27 cents just in front of the school to use it as a playground.