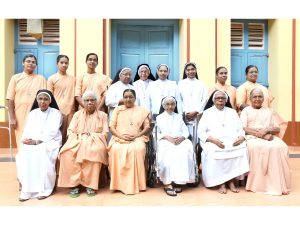 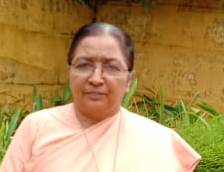 Ottapalam, with its rich heritage, had very little to be proud of , as regards educational facilities. Just a hamlet, situated between the commercial centres of Trichur and Palakkad, it was the seat of Nair Aristocrats and they were rich enough to afford education for their children in the town or in the cities outside. But the rest of the population remained mostly illiterate for want of adequate facilities. So there was a crying need to educate the women. The idea of a girls’ school was the brain child of Sir. C. Sankaran Nair, who thought of perpetuating the memory of his wife by a school after her demise. Thus was born Lady Sankaran Nair High school. But the administration seemed difficult for them and it was closed in1938.

The urge to illumine the society with the light of education and love for the Lord, propelled the Apostolic Carmel sisters who took over the management of the school on 1 st June 1938. Mother Josephine and Mother Leonora accepted the offer to go ahead with the uphill task. Thus the school came to be called as Lady Sankaran Nair Convent School. A secondary training school was opened in 1942 and in 1951 Lower Primary section was extracted from high school and joined as feeder school. Lady Immaculate English medium Junior school had its debut in 1962. The Boarding house that accommodated the students of TTI, HS and HSS was a fertile area wherein the religious vocations flourished in good number. In 2000 the High school was upgraded as Higher secondary with science and commerce streams. In 2000, the TTI students were accommodated in the new building . The L.P school reconstruction was started in 2006 and completed in 2008. The old high school building was demolished and built in 2019 and was blessed on 27 th February 2020 by   Rev. Fr. Manuel TOR, Parish priest, Infant Jesus Church, Ottapalam and inaugurated by Prof. C. Ravindranath, Honourable Minister of Education.

Here was a mission where the goodness of the Gospel had to reach, and we, the Apostolic Carmel sisters hearken to the message,‘The Harvest is ready’ and we continue the mission with greater devotion and dedication.