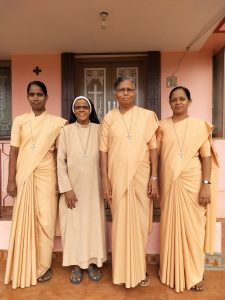 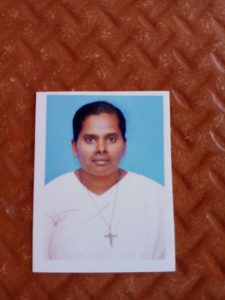 Carmel convent is the Golden Jubilee Memorial of Christ King Convent, Tambaram. They wanted to start a convent in Tamil  Nadu and it was through the instrumentality of Fr.  Gnanapragasam who was then, residing  at Tambaram  and doing his PG studies at Madras Christian College that the sisters of Christ King came to  know of this place. The priest introduced the Apostolic Carmel to Fr. Jaganivasagar who was the Parish Priest  at Nanakudi. He contacted Sr.  Silvina the Superior of Christ King Convent and also the Provincial Superior        at Calicut. Srs. Silvina and Cleta visited the place and were pleased with the eagerness and simplicity of the people. On 29th August 1986 the Provincial and her team went to see the place along with Srs. Silvina and Cleta. They wanted the sisters to bring up the standard of the children in the school, to teach catechism to women and to prepare them for marriage. Two posts were offered when the school reopened in 1987.

The Church had a plot of land which they were ready to give free of cost for the convent building, but at the suggestion of the Superior General, we decided to buy a plot for ourselves Srs. Alice, Jayamary and Arpana were the sisters to form the first community at Nanakudi. The people are mainly  farmers  and  Shepherds..   As the sisters had to take up the teaching in the school from June 1987, it was decided that the sisters would stay in a rented house in the village. Since there was no house and chapel of our own the installation of the superior took place in ‘PALMARA’house which was occupied by the Jesuits for their Social Apostolate. Since the sisters could not find a suitable rented house in the village for 3 sisters to stay, the sisters of St.Joseph of Lyons accommodated Srs.Jaya Mary and Arpana in their convent at Devakotai and Sr.Alice stayed in Tambaram.

The predominant agrarian economy of this district is perennially drought-prone coupled with the fact of ground water being scarce. Added to this unsuitable climate, lack of job, proper transport facilities and the like, people migrated to elsewhere seeking job opportunities and better living facilities. Meanwhile the work of the convent proceeded fast under the guidance of Mr. Chinnappan, the Parish Priest. The work of the convent started on May 24 th 1987 and the house was completed and blessed on 29 th October. On the blessing day of the new convent the AC sisters were welcomed by a number of people and the Bishop Edward Francis assured us with many vocations from this area to Apostolic Carmel. The first Mass offered at the convent was a source of joy and strength to the sisters. Trusting in His love and mercy the sisters move forward with their various apostolic activities in 42 substations. May the good Lord be praised and glorified for what He is to us.