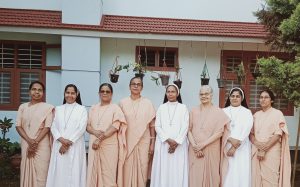 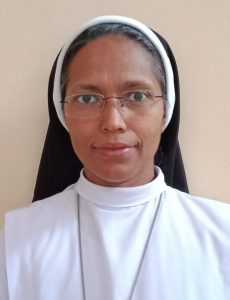 Kolayad is a mission station tucked away in the forest area of Kannavam. Twelve and half acres of land was purchased by Mother Isabel in1932. But God’s time had not come to begin the Missionary work at Kolayad. In the meantime the school for girls was opened by the parish and managed by two secular teachers. In April 1939 Bishop Proserpio. S.J. of Calicut approached Mother Josephine the then Superior General to take charge of the parish school in Kolayad. Mother General asked the Superior of Sacred Heart convent, Tellicherry to open a filial house at Kolayad. It was proposed that the sisters should go daily by bus to the school and return in the evening as there was no accommodation for sisters.

Rev. Fr. James Montinari S. J. the ardent Missionary of St. Cornelius Church and Brother Baviera. S.J. added a shed to the existing school building and partitioned a part of it with bamboo tatties to provide room for sleeping, kitchen, store, refectory and bathing rooms all in one. With this arrangements the good fathers welcomed Srs. Milburga and Lydia on June 5th, 1939. An orphanage was opened for better attendance for the school and children were lodged in the school itself. On 26th January 1944 the Bishop came over to bless and consecrate the crucifix, ciborium and chalice, Mother Josephine requested him to hand over to the Apostolic Carmel the school building and the little bit of ground around it. With his consent Frs. Sequiera and Gregory marked out the boundary. Due to the upgrading of the school into Higher Elementary school the Children’s Home grew in number but there were difficulties regarding accommodation. The sisters received a donation for Rs.1,21,200/- from the Misserior for a new building for the children’s home and the foundation was laid in February1980. On 9thNovember 2009 the new convent’s foundation stone was laid and started the work and was completed and blessed by Bishop Varghese Chakkalakal on 15th February 2011.

The foundation stone for the Children’s Home was laid by Sr. Ancilla on 7th October 2014. On 21st November 2015 Bishop Alex Vadkumthala blessed the Children’s Home. The old children’s home, the part which was not put down was remodelled and made in to 12 rooms for working women and it was blessed on 18th June 2016. St. Xavi- er’s children’s home continues to be at the service of the girls who live in interior places away from schools and come from broken families. They are given special coaching, counselling and opportunities to develop their talents etc. They are our first concern.